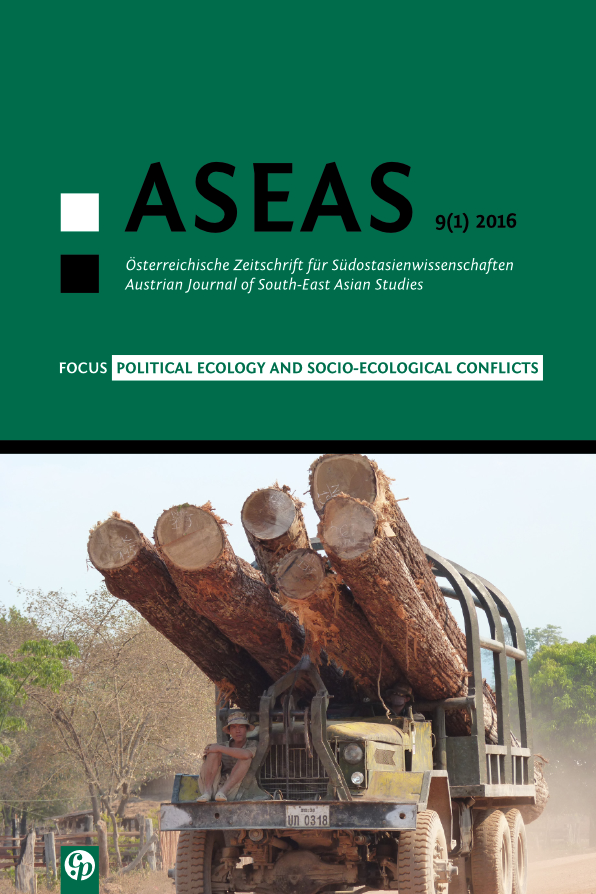 ASEAS 9(1) features a focus on socio-ecological conflicts from a political ecology perspective. It brings together an interdisciplinary collection of expressions of conflict over land, forests, water, mining, and environmental assets. It discusses the power relations underlying these forms of contestation as well as the strategies of different actors to deal with the unequal outcomes of environmental and resource politics. The contributions range from the analysis of land conflicts against the expansion of oil palm monocultures and other large-scale land deals, resistance against the dispossession of ethnic minorities from forest lands, the changing terrains of mining conflicts, the unequal effects of flood management to the potentials and pitfalls of indigenous mobilization against resource enclosures or the changing networks of environmental governance through green economy discourses. The articles employ different conceptions of socio-ecological conflicts (from political economy to poststructuralist assemblage theories) to understand the contested nature of resource appropriation and control in Indonesia, Thailand, Myanmar, the Philippines, and Papua New Guinea. The contributions highlight the complex and diverse forms of socio-ecological conflicts in Southeast Asia that constantly transform society-nature relations in unpredictable and often contradictory ways. Thereby they also show the transformative potential of collectively mobilizing people, even in the most marginalized and seemingly powerless contexts.