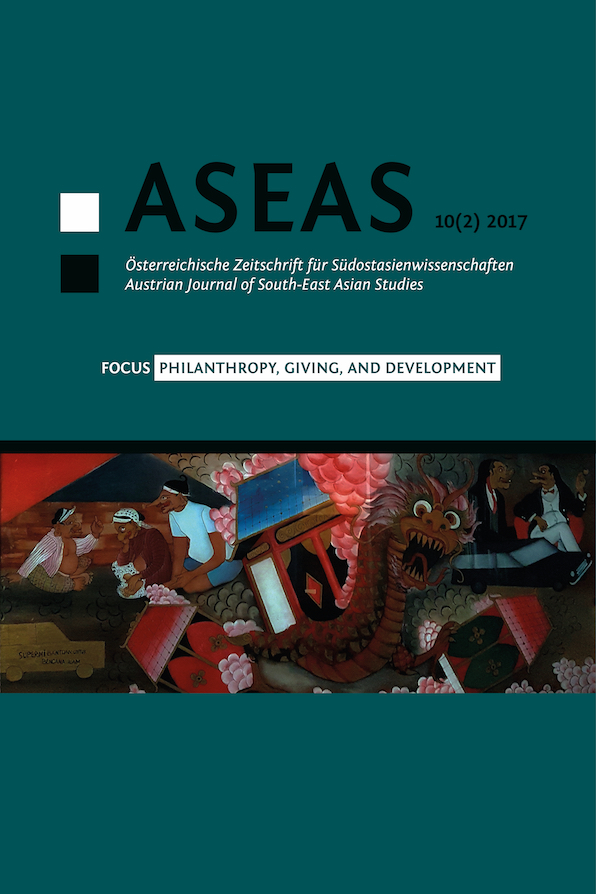 ASEAS 10(2) focuses on the evolving state of philanthropy in Southeast Asia. Collectively, the contributions provide an overview of the trends and tensions in this sector, which is being shaped by often conflicting notions of charity, development, and business. Two of the articles refer to the decreasing presence and changing nature of funding from philanthropic foundations from the United States, such as the Ford Foundation and the Rockefeller Foundation. Their tradition of context-specific strategic grant-making in the region is being challenged by the paradigmatic shift underway globally, which is being triggered by the establishment of the Bill and Melinda Gates Foundation and other 'technocratic' foundations. Articles focusing on the entire region as well as on specific countries (Myanmar, Thailand, and Indonesia) highlight home-grown philanthropy and how new forms of personal and institutionalized giving are emerging as a result of a growing middleclass and accumulated wealth. Pressure is also growing on local companies and corporate actors to show a socially conscious image by funding projects and contributing to sustainable development. Professionalization of faith-based giving is further leading to new philanthropic models such as the rise of Islamic grant-making foundations in Indonesia and other countries with Muslim communities as described by two of the articles. A question running through the issue is the extent to which this growth and diversification of philanthropy is conducive to equitable and inclusive development and democratization of society.